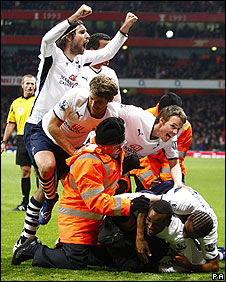 Well I’ve been meaning to write a post about the whirlwind week at Tottenham for a while now, but every time I went to there seemed to be some new news!  So before the weekend game against Liverpool, I thought I’d write about everything that has gone on in the past week.

Hail Harry! – Well well well.  I woke up Sunday morning, the sun was shining, the air was crisp, and Comolli was out.  Bliss.  I’m pretty sure most Spurs fans were happy with the sacking of Ramos, Comolli, and Poyet thanks to a English football legend coming in to take the Spurs reigns.  Personally I always thought we should have give Ramos a chance, at least until the new year as I don’t feel the awful recent form has been all his fault.  But to be honest, getting Harry in means a whole fresh new start for the team, the fans, and the club.  Good times.

First win! – The game against Bolton was crucial for us if we were to ever stop being the laughing stock of the league, and thankfully the team did well.  Maybe it was just a physiological boost with Harry coming in that motivated the players, or Harry really did work some magic, but whatever happened it was good to see a win, a clean sheet, and Pavlyuchenko getting his first league goal.

What a derby! – Hang on, did that game really just happen?!  Whoa what a game, quite possibly the best derby in the past decade, and surely one of the best games we’ll see in the Premiership this season.  Great goals all round (I was more impressed with Modric’s strike that hit the post than Bentley’s awesome long ranger), brilliant atmosphere, and a great life for Tottenham. I really can’t describe how good it felt for Spurs fans when the full time whistle blew.

A new ground! – And to top the week off, we see that Tottenham are looking to get a new 60,000 seater stadium!  It will be a shame to move away from the lane, however the extra revenue will mean we can progress further as a club.

THIS IS A CALL TO ACTION AREA

This is just an example shown for the theme preview. You can add text widgets here to put whatever you'd like.